The city of Birmingham has a masterplan for developing transformational change

Markets are the heart of any city, they are the place people socialise, share information, memories are created and business is done. They have something supermarkets do not, the freshest fish, the vegetables straight from the farmer, services you usually have to hunt around for and advice from people that have had generations working on them.

The campaign will help people explore the area, to understand how vibrant and full of life it is. And it will illustrate the true value of the Birmingham Smithfield’s market. 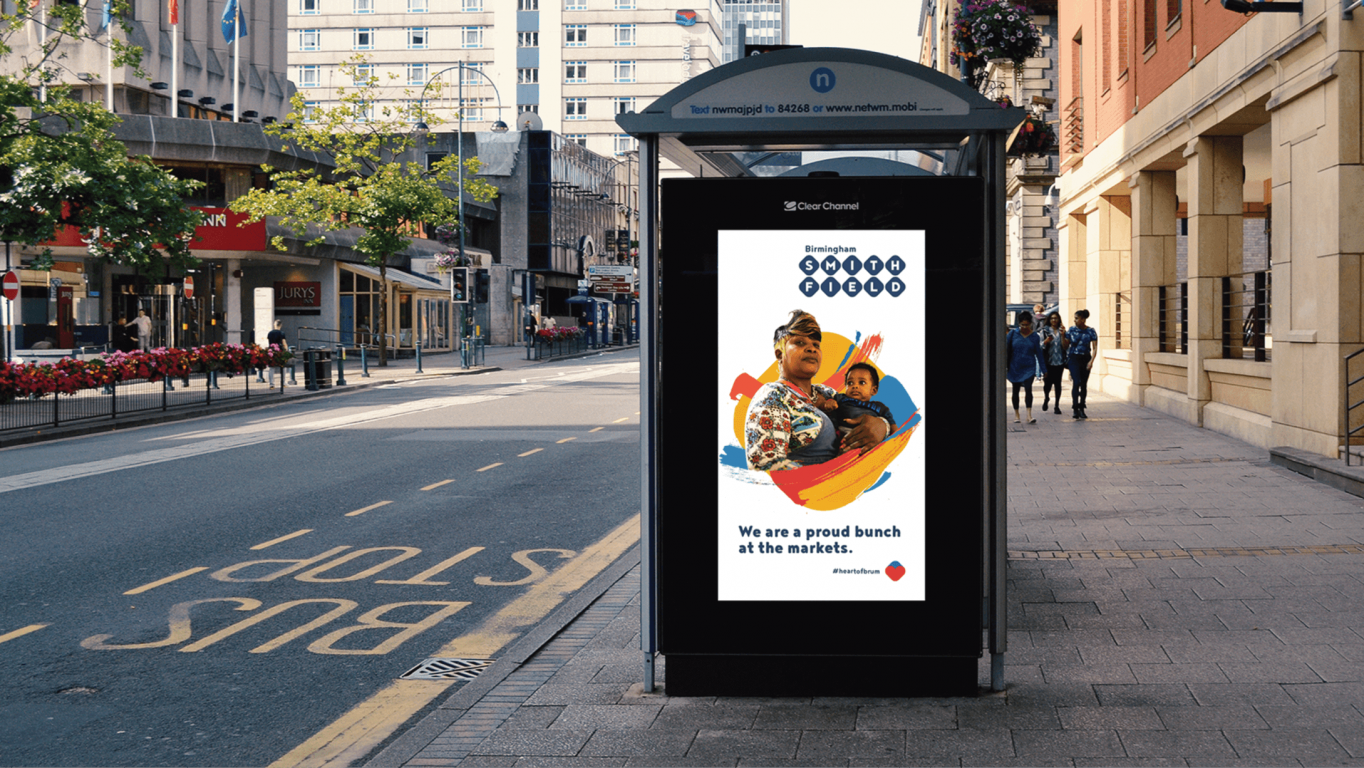 Over the years, Birmingham Smithfield Market has lost its presence in people's daily lives. The market has been divided into a smaller markets with different marketing strategies and visual presence. This division of the area has turned into a losing marketing strategy. The poor presence of the market can be clearly felt amongst the young population.

The market has became known as a place for the elders. 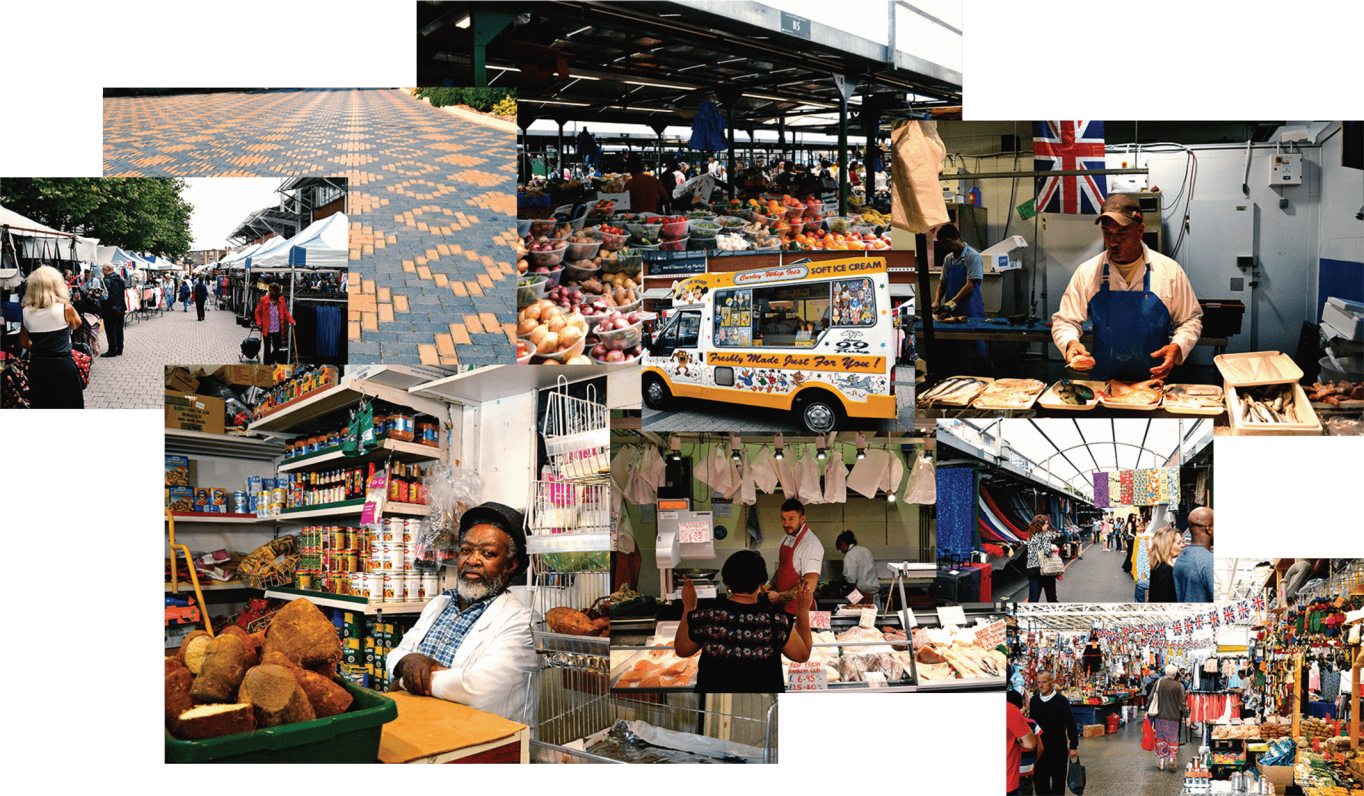 As a part of the project, we’ve conducted an extended research. We even visited Birmingham Smithfield in order to feel it’s spirit. Our research was divided in three parts:

PAST: Cultural and philosophical research, as well as history of the graphic representation of the area.

FUTURE: We needed to know how the area was going to change and how the new project was going to affect people.

The next step that we took was to design a wide range of materials in order to test the broad effectiveness of the possible solutions.

Birmingham is the second largest city in England. It began as a Saxon village. In the early 12th century it grew into a town. In 1166 the King gave the Lord of the Manor, Peter De Birmingham, the right to hold a weekly market at Birmingham. Once a market was up and running merchants and craftsmen came to live in Birmingham and it soon developed into a busy little town.

Birmingham has a younger population compared to England as a whole.

The city of Birmingham has developed a masterplan for developing transformational change in the city center. The Big City Plan has been shaping Birmingham since 2010 and it has outlined a structure to modernize zones of the city and provide support.

Birmingham Smithfield Market is an important part of the plan. Birmingham’s markets have played significant role in the city history. They have helped the development of the city over the years, making it a vital part of West Midland of England.

We have been commissioned to develop a logo and a visual language to support the Birmingham Smithfield Markets campaign. The main objectives of the campaign is to

highlight the importance of the area and to tell the story of the local people.

When we started the research of the visual heritage of the project, first we looked into the buildings, the one that were there over the centuries, the one that are there and the one that will be there. Soon we realized that was not the way to approach this.

We decided to go to the basics, back to the history, so we started looking into what made the city great. We realized that the

traditions of the hard working people is what has always moved the city.

So we looked into this closely, to find out the significant founding father of the city called de Birmingham family. That is where we found the key identity elements that we believe will make the area stand out again.

In order to change people perception of Birmingham Smithfield, the area needs a clear brand identity.

Identity that is vivid, bold, intelligent and it is able to reach a broad audience and communicate with the diverse socio and cultural contexts.

The new Birmingham Smithfield logotype looks back on the city heritage, but with a contemporary, simplified approach. The lozenges refer to the market origins of the city. They encapsulate the letters and form a never-ending grid/network of opportunity and diversity. Each symbol can be seen as an individual from the market—resident or visitor. 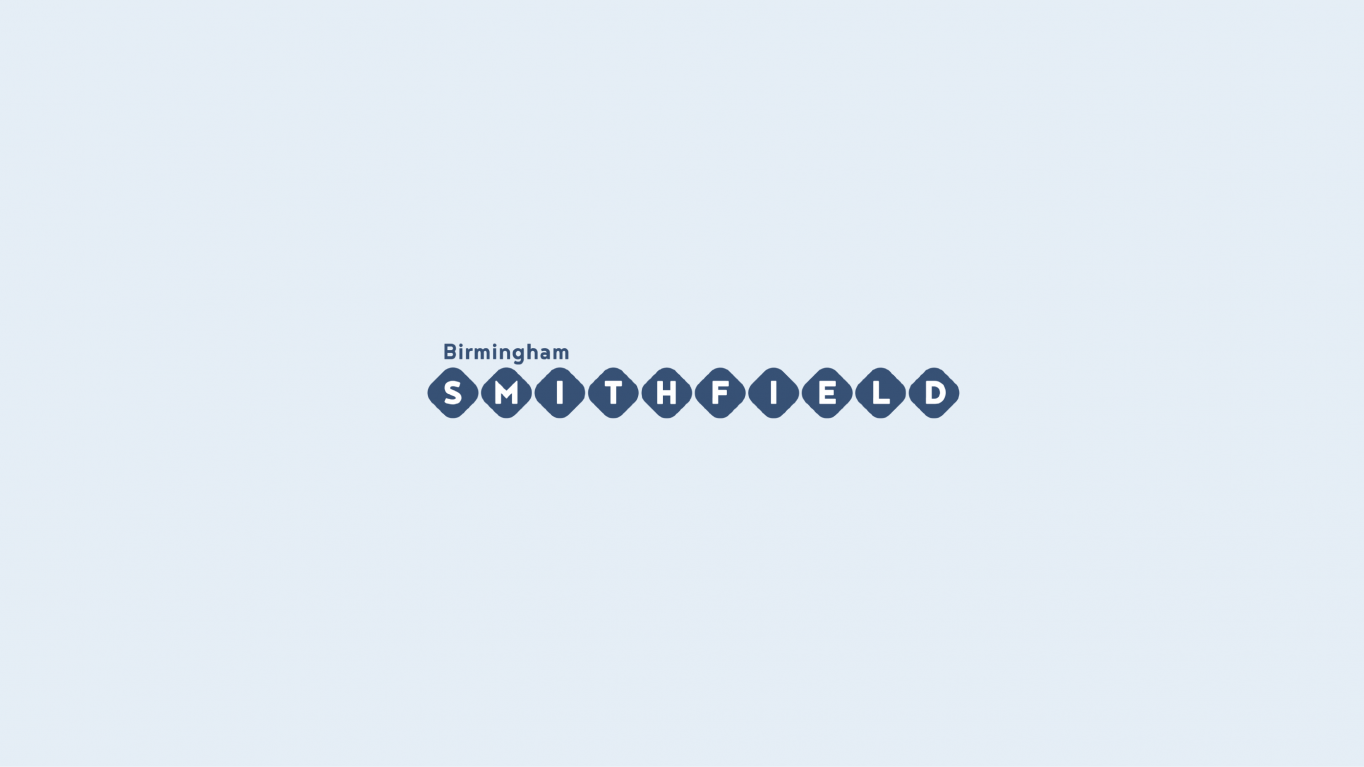 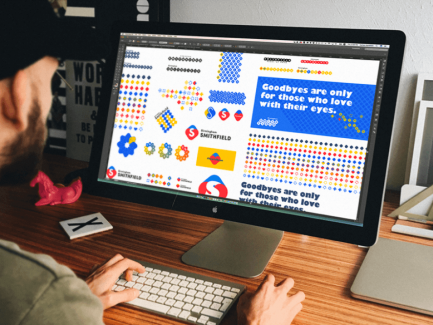 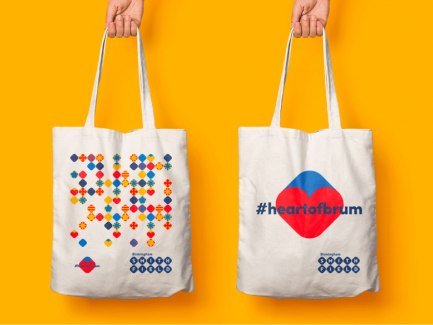 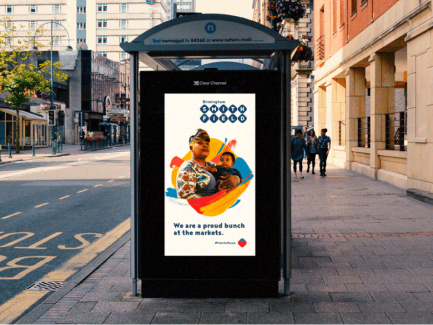 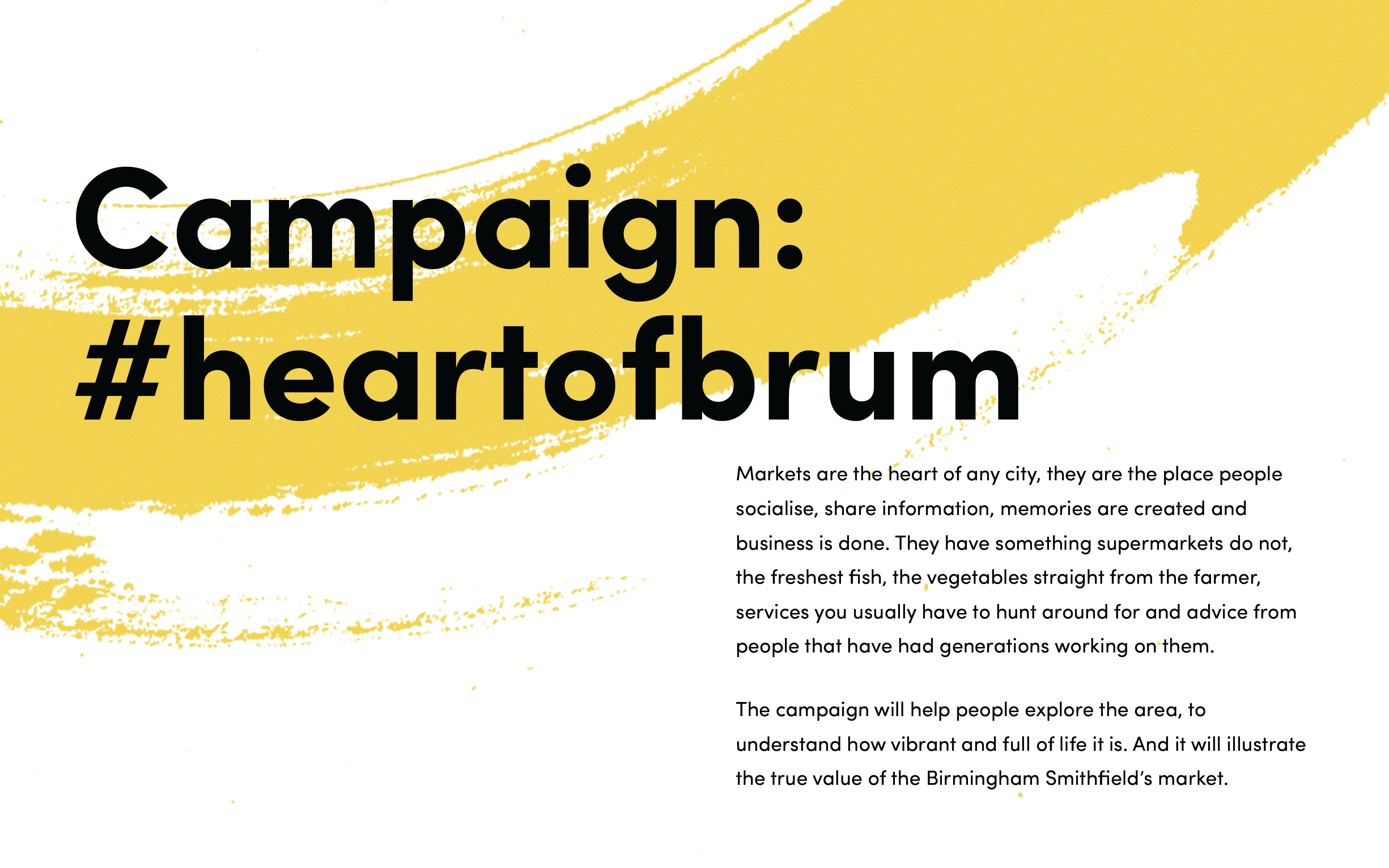 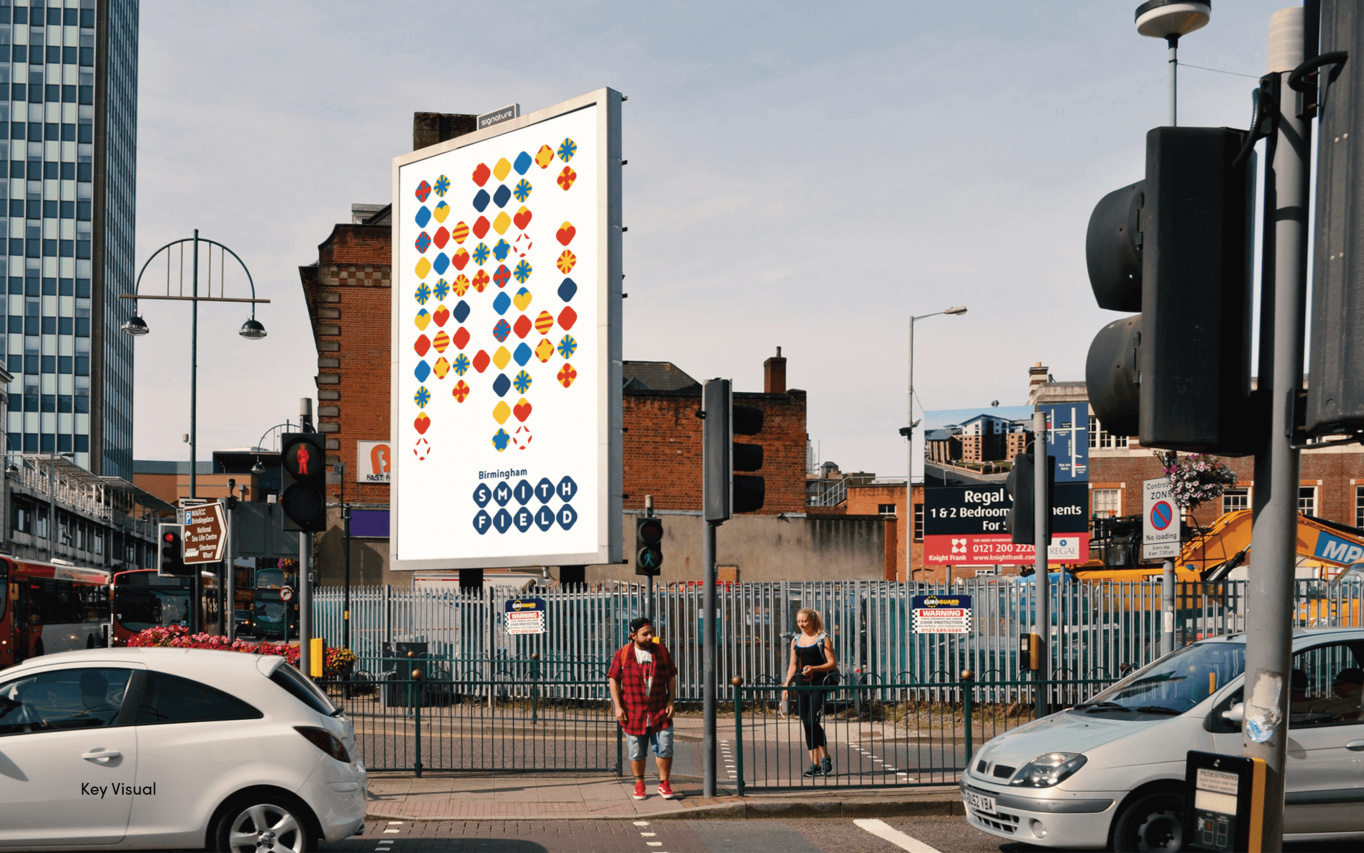 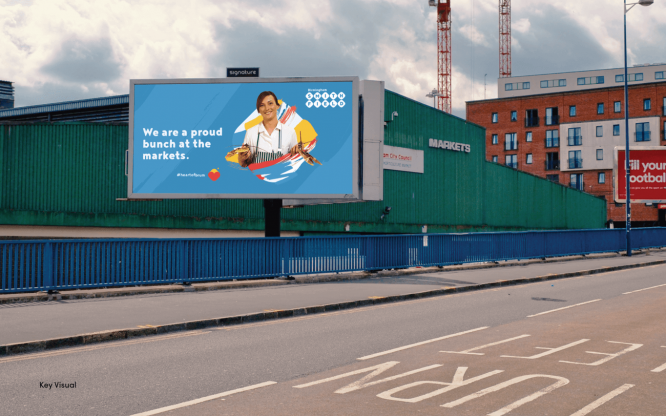 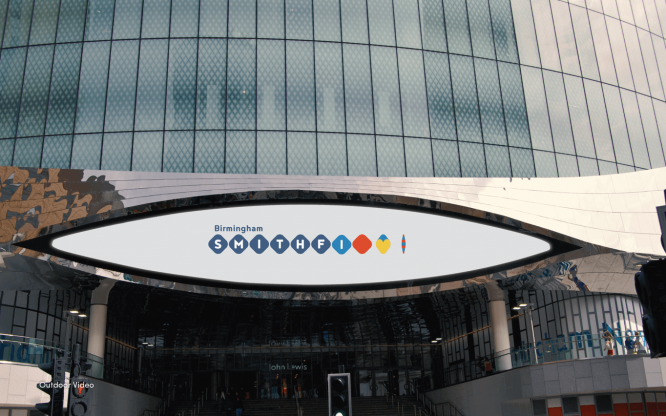 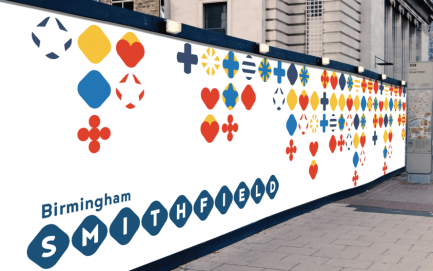 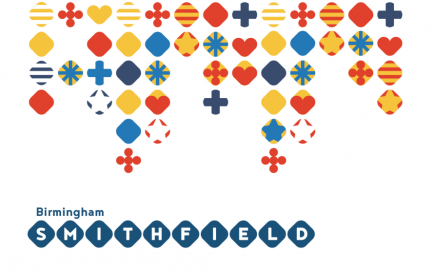 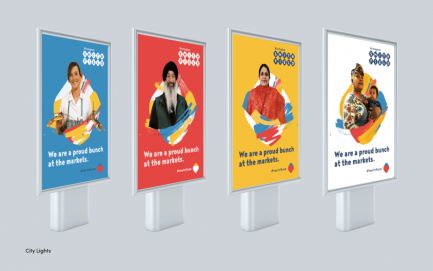 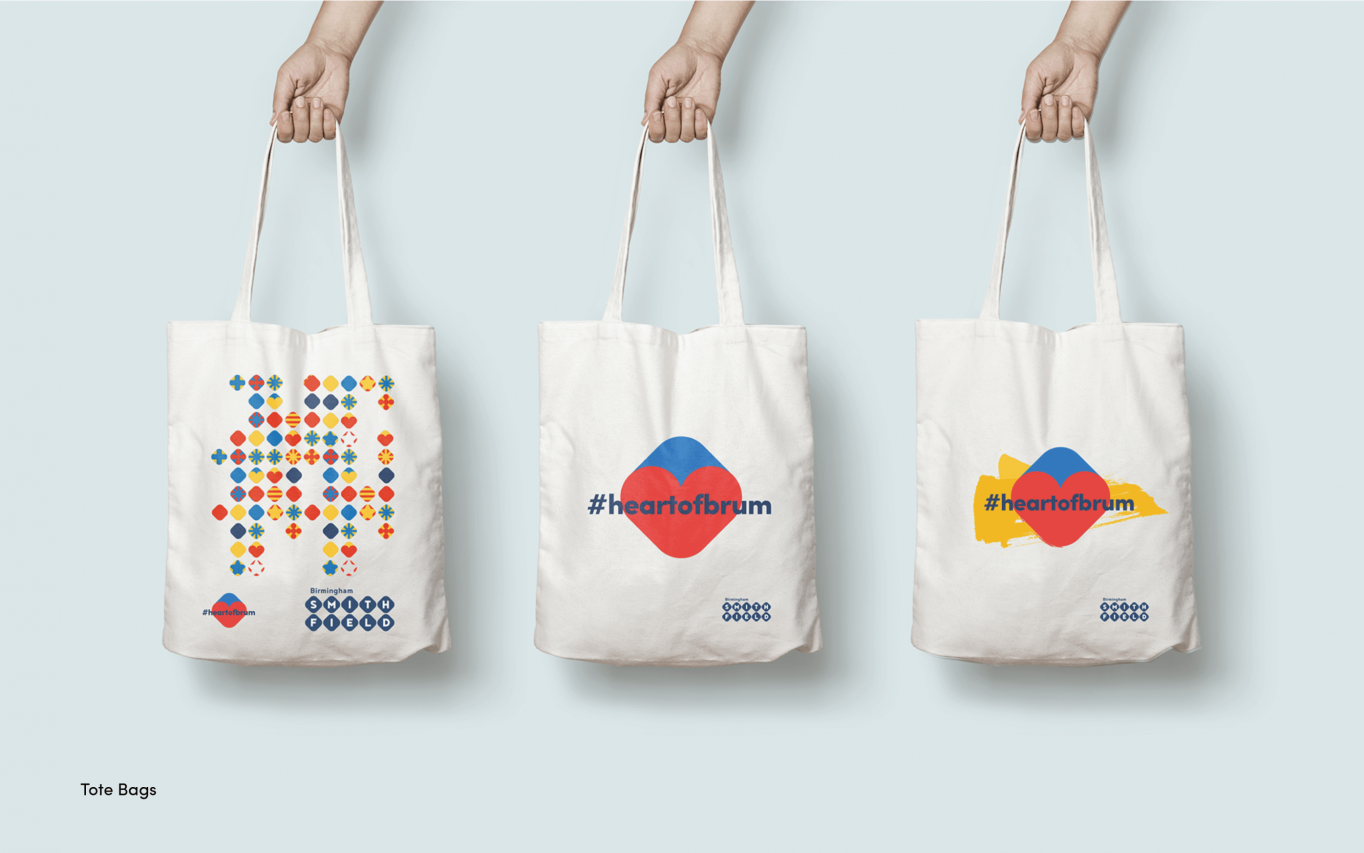 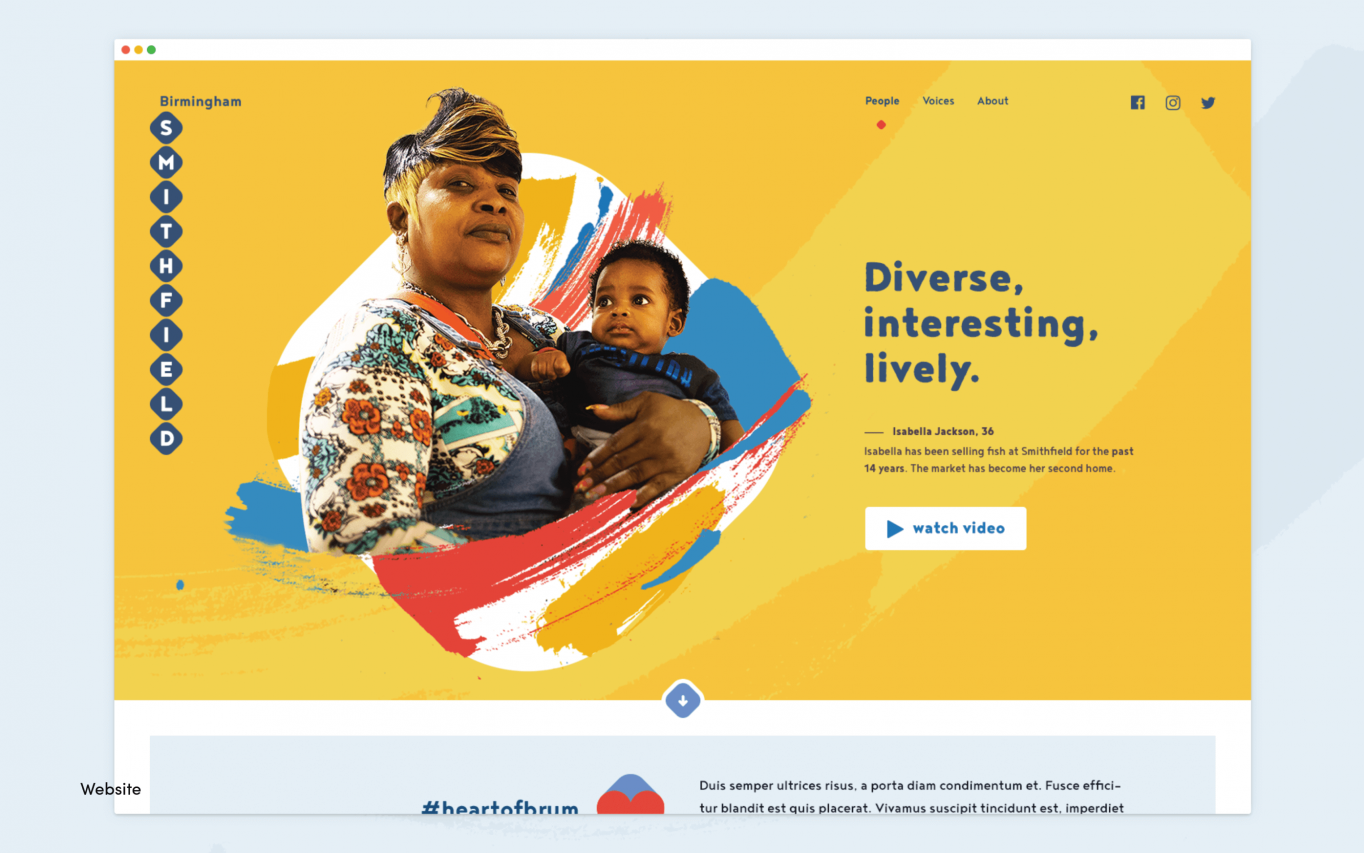 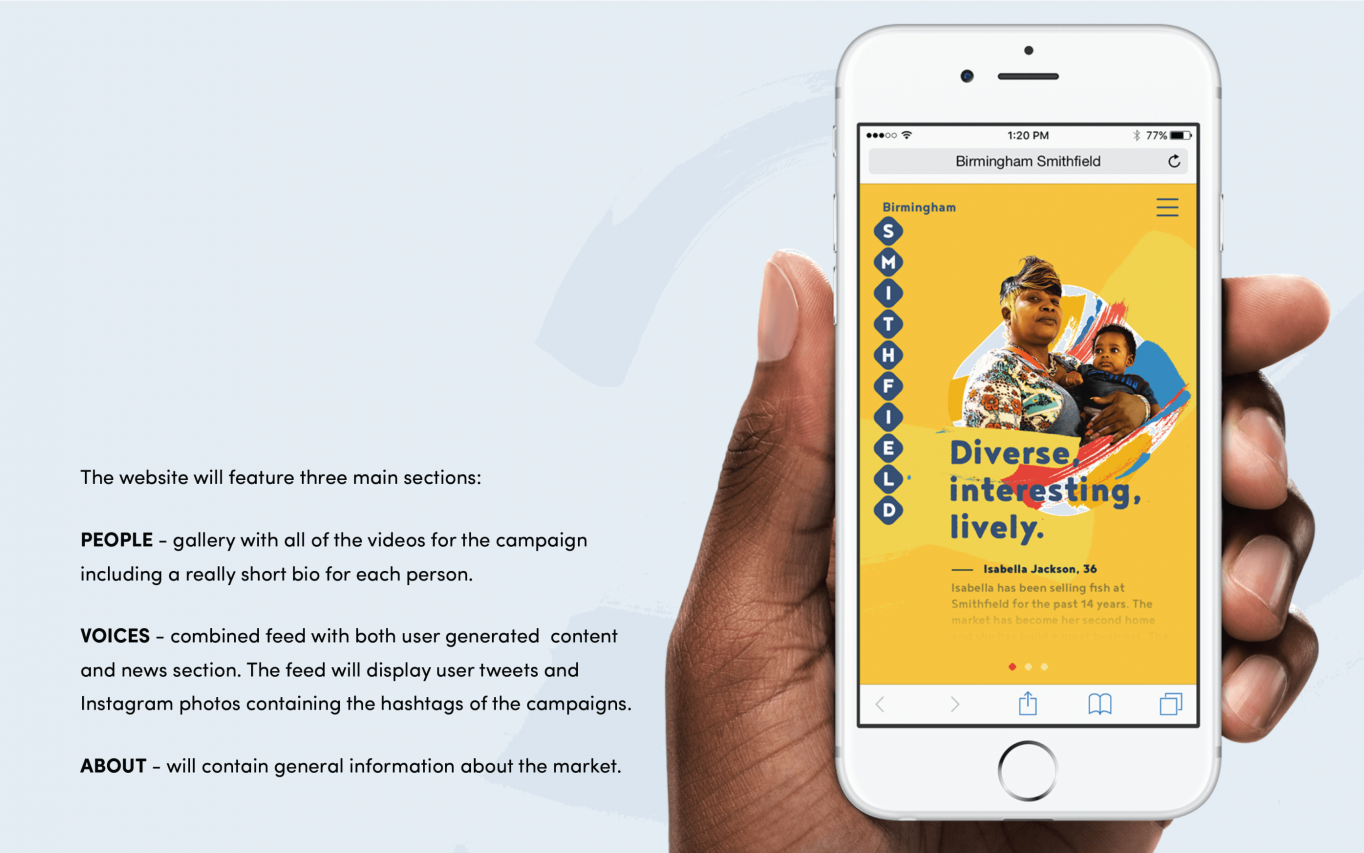 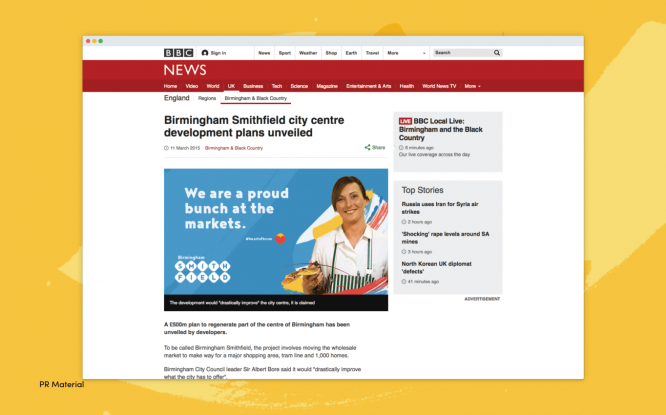 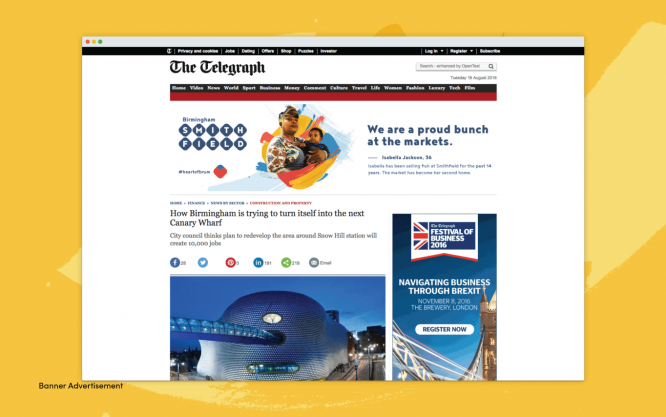 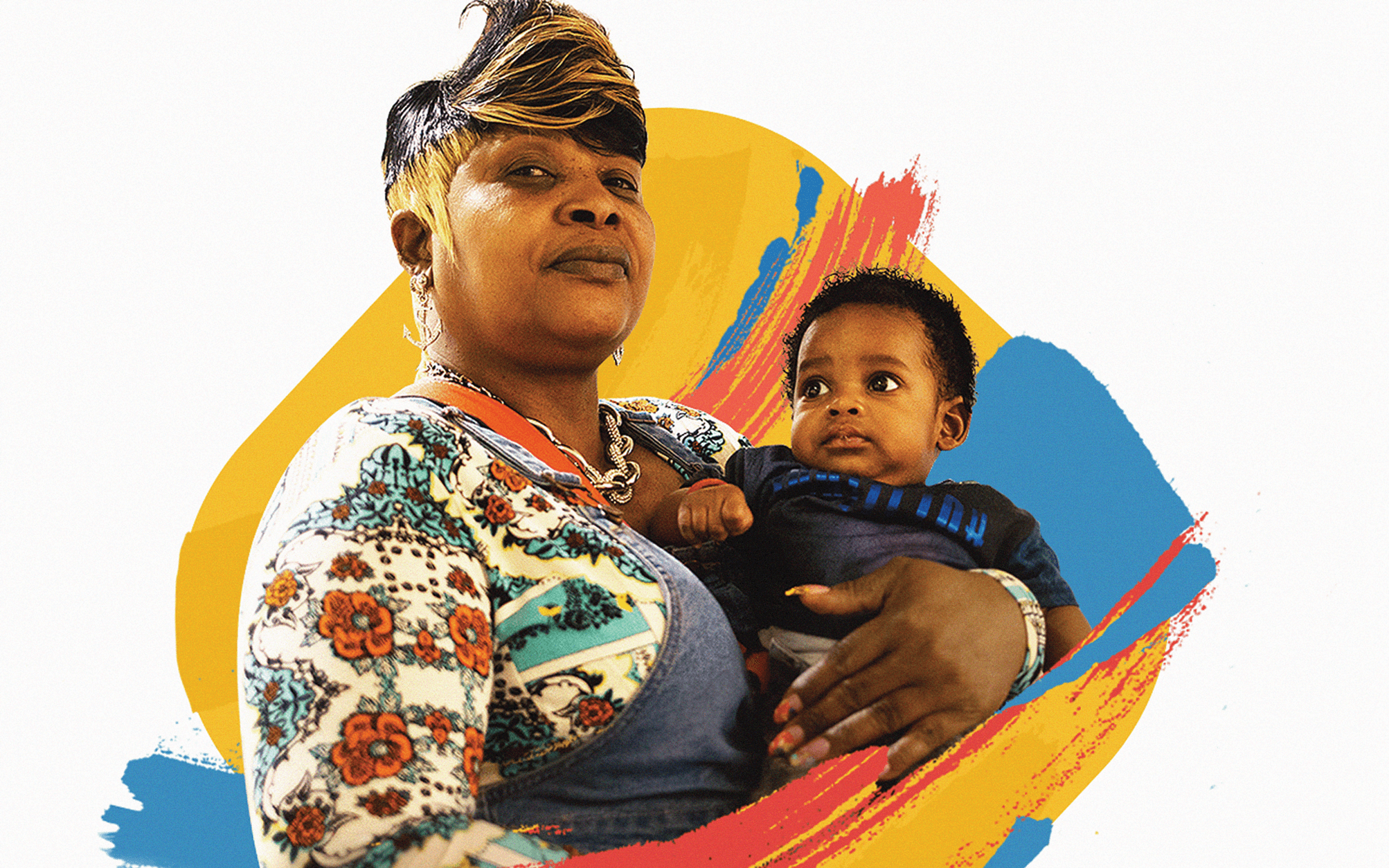